This is a story in three parts.

Part the first: Two weeks after my son was born, I was at the doctor and was told that he hadn’t gained enough weight. I really like his doctor, who very non-judgmentally reassured me that formula was an option, or she would help me make breastfeeding work. I opted to stick with nursing, and realized shortly thereafter that I needed to nurse more. Like, a lot more.

These are all things I know and have heard before, but hearing them that day was the reminder I needed. Use whatever time you have, I thought.

Part the third: I’d been slogging my way through The Winter of the Witch. Part of the problem was that I knew how long it was. Part of it was the slow pacing when the author was taking her time. And part of it was the little message at the bottom of my Kindle, telling me how much time it would take me to finish the book. That day, it said, “Time left: 6 hours.”

Now it all comes together, because I’d been considering putting the book down. I felt like I would never finish. But here in black and white was proof: I’ll finish. It’s easy. Baby steps are steps, too. I can take it a minute at a time; just read for 6 hours. And I thought to myself, if I spend 4 hours a day stuck in one place nursing a baby, all I have to do is spend that time reading, and I’ll finish tomorrow!

Now, I know this seems like an obvious solution, and believe me, it was. But let’s bear in mind that I was a sleep-deprived new mom, stressed and overwhelmed. And the epiphany I had came at just the right moment, to remind me of three things I already knew: Being stuck in one place may seem rough, but it’s often an opportunity to do something you don’t normally have time for. Reading is like ice cream – it fills in the cracks. And how do you eat an elephant? One bite at a time.

So yeah. We had a very crazy couple of months, beginning with Scott leaving Dhaka and coming out to California on Thanksgiving and ending with a move to Seoul in February.

Since then, we’ve been enjoying our time here, and enjoying being settled and together. Our household goods (HHE) got here in March, our car arrived in April, and at the beginning of May we took advantage of a couple Korean holidays to go visit Shanghai Disneyland.

K started preschool a couple weeks ago. We put her in a Korean preschool, so a) hopefully she’ll learn Korean, and b) none of the staff speak English, which makes life a *tiny* bit difficult for me. Luckily, they mostly communicate through parents with an app, so Google Translate can see us through. Also, Scott’s Korean is fantastic, so if I’m really stuck I can rely on him.

Trey has started talking. Not two weeks after I took him in for his 15 month appointment and was assured that his not having any words is TOTALLY NORMAL at this age, I go into his room one morning to change his diaper and hear him say “Momma” to me as plain as day. Followed by “Dadda” and, later that day, “shoe.” So, yeah. That. O_O

Reading-wise, hm. It comes and goes. March and April I was doing really well; I read 9 books each month. It made up for my lackluster reading life in January and February (which I actually thought was quite understandable, what with moving and general life craziness). In May I went back down to 5, which now that I think of it is still quite good. I blame the trip to Shanghai; not much time for reading, really, and it threw off my groove a bit. Also, K starting school has created a new schedule that we’re still getting used to, and I typically spend my hours between drop-off and pickup Doing Useful Things, as opposed to sitting and reading. Unfortunately. But as we continue to adjust, hopefully I’ll work in a bit more time for reading. I did manage to listen to an audiobook, which was nice, but I had to fall behind in my podcasts to do it. And, naturally, a recent resolution to read more mainstream fiction written by LDS authors has EXPLODED my TBR list.

So last you heard, I was back in Dhaka with the kids. Trey was medically cleared (still is– he’s doing great!), and I was actually about to start a job at the Embassy. That was early June. In early July, some of you know that there was a terrorist attack at a popular bakery/restaurant in Dhaka.

It took about ten days, but the Embassy (finally!) decided to go into Authorized Departure. This is something they’d been deciding on and talking about for months, ever since the first attack back in October 2015.

For US Embassies, there are two states of Departure: Authorized and Ordered. Authorized still leaves families with a choice; you don’t HAVE to go, but you are eligible for benefits if you do. Ordered is just what it sounds like– all of the EFMs (spouses and children) HAVE to go, unless you get special permission to stay.

Dhaka went into Authorized Departure, so staying was on the table — technically. But the situation was pretty unstable, and Scott and I decided I should take the kids and go.

So here we are, in Anaheim, California. Scott was able to fly out with us and help us get settled for a week or so, which was a total lifesaver– especially on the layovers!

We’ve lived here before, so I’m already reasonably familiar with the area. I still have some friends here, so I have people to help with babysitting and things. And Special K is LOVING Disneyland. We found a place within walking distance (it’s a long walk, which I actually love), and I take the kids almost every day.

And that’s the situation for now! Scott is still in Dhaka, although his tour is ending soon, at which point we’ll have home leave and some training before going to Seoul. Look for some posts about Disneyland — I’m kind of a Disney pro these days.

Once upon a time, I went into labor at 4:30 on a Monday morning not too long ago. I had been to the hospital a few times already for false labor, so Scott wasn’t convinced that this was the real deal, but I informed him that it was. (The strength with which I gripped his hand during my contractions helped make my case, too.)

Off we went to the hospital. On the way I texted my doctor, who, as it so happened, was headed to the airport. This particular Monday, you see, was the one day that my doctor had told me I wasn’t allowed to have a baby. Because he was going out of town. To which I had jokingly replied, “The baby comes when the baby comes, Chris!” (Yeah, we’re on a first name basis; he’s Scott’s uncle.) So already off to a good start, there.

The day went on, and I progressed pretty well. I got the epidural once I was admitted, and my water broke a few hours into labor. The baby’s heart rate dropped a couple times, which was a little tense, but my awesome nurses were able to get it back up.

(At this point, I should explain that I was trying to have a VBAC, which is a Vaginal Birth After a Cesarian. Meaning, Special K was a c-section, but I wanted to avoid a c-section in this case. Every single person there was completely supportive of my goal, which made the baby’s dropping heart rate extra tense. If they couldn’t get it back up, I’d have to go into surgery.)

By 5:45, I was almost ready to push. In fact, my nurse had me push a little through one of my contractions, just to get that tiny bit of dilation I still needed. I’d been sending a couple emails and texts during the day, and I let Chris know it was almost time.

So there I was, finally ready to push, just like I’d been hoping for during all 9 months of my pregnancy. But I was starting to feel nauseated. In fact, I told my nurse I was definitely going to throw up. Being an awesome nurse, she wasn’t even fazed. In fact, she told me it was a good thing, because throwing up uses most of the same muscles that pushing does. So during the next contraction, I tried to give a good push (difficult while you have an epidural, in case you were wondering), and I also threw up.

And that was when it happened.

I suddenly felt the worst pain I’ve ever felt in my life. It was worse than the contractions had been that morning, before I’d gotten medication. It felt exactly the same, actually, but a million times stronger. I told my nurse, “It hurts, it hurts so bad” over and over. But when I looked at the contraction monitor, I saw that I wasn’t having a contraction. And that the baby’s heart rate was dropping steeply. And when you’re in labor, you really don’t want to see the baby’s heart rate do that.

Here’s what any doctor will tell you about attempting a VBAC. There are a lot of things that can prevent it, but the worst thing that can happen is a uterine rupture, which is when your uterus breaks open along the scar you already have from your first c-section. Your chances of a rupture are really small, though. In fact, they’re about 1%.

Well, when I looked at that monitor, it didn’t take me long to realize I had ruptured. And after that, things started moving fast.

Within ten minutes, I was in an operating room.

Thirty seconds after that, the baby had been born.

He wasn’t doing awesome though, and they took him away to get ready to go in a helicopter to another hospital with a NICU. 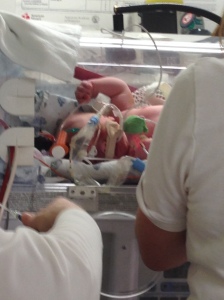 (As he was being worked on, one of the pediatric nurses told Scott and me that he was “going to be just fine.” I wonder now if she should have said that, because no other single person has been that cheerful about him since. But in that moment, it was definitely what I needed to hear.)

By the time he was ready to go, I was out of surgery and back in my room. They brought him in to see me for a few minutes before he left. Scott got to fly with him in the helicopter.

He spent two weeks in the NICU, which were among the more stressful weeks of my life. He did great, though. He responded well to every treatment they thought to give him, and his doctors are all “cautiously optimistic,” which I take as permission to relax.

Even though my experience wasn’t ideal, it worked out well, overall. Despite the fact that we pretty much had the worst possible circumstances, everything since then has gone perfectly. Trey is constantly referred to as the Miracle Baby, which I feel he is. So many other things could have gone wrong– I could have had a nurse who was asleep on her feet, I could have ruptured when she was out of the room, the doctor might not have been able to make it to the O.R. in time– that I feel incredibly lucky to have had the great outcome that we did.